After many decades, there is hope in the air. It is no coincidence that the intra-Afghan negotiations began closely on the heels of the nineteenth anniversary of 9/11 attacks. The current negotiations that have brought the Afghan government and the Taliban under the same roof, offer promise after ages. The Afghan War, apart from being a huge drain on the U.S. taxpayers’ money, has been mired in controversies, for which there has been little accountability. The American counter-insurgency measures have not delivered on the ground. In fact, their continuing reluctance to engage with the Taliban at a time when they were far less formidable has stretched the war for many years. The Taliban in Afghanistan have become a fait accompli; hence, all the stakeholders including a reluctant India have had to accept the idea of talking to them.

Prime Minister Imran Khan, always a very strong advocate of political solution for Afghanistan, tweeted, “Enjoyed meeting Dr. Abdullah Abdullah, Chair HCNR [High Council for National Reconciliation] of Afghanistan. We had a very interesting conversation: theme being, the past is an invaluable teacher to learn from but not to live in. We must look forward towards the future. I wish him all the success in his mission.” This tweet came at the conclusion of a very productive visit of top Afghan peace officials’ departure from Islamabad, after a three-day visit in September 2020. 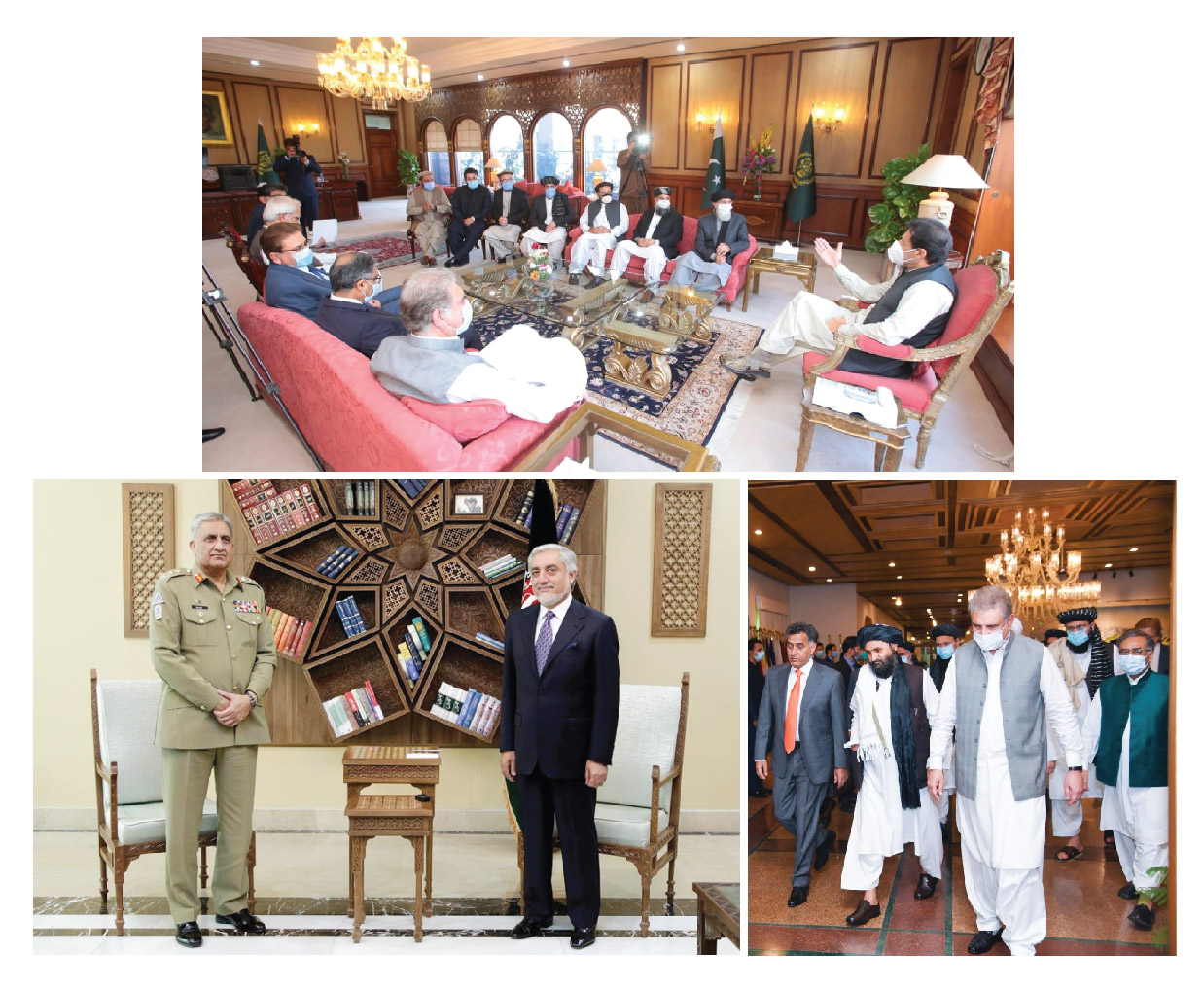 The visit had both very good optics and substance. This was Dr. Abdullah Abdullah’s first visit to Pakistan in his capacity as chairman of the HCNR. The visit happened after twelve long years. He is no stranger to Pakistan. He is a man who has always taken out time to meet all track II/1.5 delegations that visited Kabul. He had also practiced medicine in Peshawar. However, he is not exactly known for having a soft corner for Pakistan. In fact, on many a occasion his bias in favor of India was very obvious.

However, Dr. Abdullah Abdullah that Pakistan saw and heard in Islamabad this time, was a different man. His statements about commitment to the process where he talks about “seizing the moment”, are both comforting and encouraging. The process has regional and global support, and the indigenous reciprocity has improved. The commitment to the peace process is showcased by the Taliban and Afghan peace negotiators, by agreeing to a code of conduct to safeguard against the risk of any breakdown in talks. The two sides with the U.S.’ support drew up nineteen ground rules that their negotiator should observe during the talks.

A senior western diplomat rightly pointed out that firing up of code of conduct was extremely crucial as it ensures that both sides are willing to continue talks despite an escalation in violence on the ground. Previously, this could have proven to be the biggest impediment to progress. On February 29, 2020, the United States and the Taliban signed a peace deal. The deal’s main objective was to find a political solution to the conflict and wind down a twenty-year war in Afghanistan.

The first round of negotiations excluded the Afghan government, although the elements of the peace deal needed action from the Kabul government. It was initially rejected by President Ghani. It took a lot of covert nudging and overt arm twisting, especially by the United States including threats of financial cut-off that finally led to the intra Afghan dialogue between the Taliban and the Afghan government. A lot of commentators who only see this from the U.S. election lens, see it as Trump’s attempt for a politically palatable exit from the U.S.’ longest armed conflict, reinforced by his recent statement that troops will be back by Christmas.

However, if the peace process agreement is to be salvaged, and eventually have peace dividend in the shape of sustainable peace on the ground, some very contentious issues need to be addressed. The most obvious being the Taliban fragmentation and lack of trust and respect between Taliban and the Afghan government. The continued reliance of the Taliban on violence on the ground to be able to negotiate from a position of power does not help the situation either.

One of the conditions laid by the Americans for the Taliban to become a part of the political solution in Afghanistan was to ensure Afghan land will not be used against American interests, read, Al-Qaeda and the Islamic State, will not be allowed to operate from Afghanistan. This is a concern which resonates with all the regional/peripheral powers also. A massively reduced U.S. security contingent, which is a Taliban condition, would make monitoring very difficult. The presence of the Islamic State, Al-Qaeda, and the Taliban to be able to simultaneously operate in Afghanistan would pose an unsurmountable threat to the process and eventual settlement.

Dr. Abdullah Abdullah in his historic visit to Islamabad also made the historic commitment to not let the Afghanistan land be used against any state. This is a tall commitment, also impossible to fulfill on the ground, until and unless all factions are onboard and the security intelligence infrastructure is beefed up enough to deliver on the ground.

The backdrop of these major strategic concerns are the issues of women and child rights, freedom of expression, role of Islam and Taliban in the constitutional and democratic framework of the country.

Zalmay Khalilzad, U.S. Special Representative for Afghanistan Reconciliation at the State Department, while acknowledging the positive role of Prime Minister Imran Khan and Chief of the Army Staff General Qamar Javed Bajwa, hinted at seeking an agreement between Afghanistan and Pakistan as an adjunct to internal peace. He further added that both countries would “agree that their territory will not be allowed to be used against the other by extremist groups that would undermine the security of the other.” Mr. Khalilzad was also of the opinion that he saw economic dividends, which would be transformative for the region should Kabul and Taliban reach a deal and peace comes to Afghanistan.

Taliban casualties in the conflict are heavily attributed to Indian military aid to the National Directorate of Security and the Afghan National Army. India pumped in approximately 3 billion dollars in Afghanistan in the last fifteen years, in the form of so-called aid for social development, almost one-third of it was for fueling the war machine. The extent of RAW’s involvement in Karachi, Balochistan, KP and the recent urban center attacks is still emerging. The intelligence gathered from Kulbhushan and his public confession is indicative of the strategic directions given to him by South Bloc and Mr. Ajit Kumar Doval, National Security Advisor to the Prime Minister of India.

After enjoying years of strategic space against Pakistan in Afghanistan and exploiting the vulnerability to Pakistan’s disadvantage, the tables are turning. Resistance is bound to come. Hostile intelligence agencies are targeting the peace process. The article ‘Indians and Central Asians are the new face of the Islamic State’, published in the American magazine Foreign Policy, reveals that Indians are involved in attacks in Afghanistan and are also fighting in Syria. The aim is to turn the various fault lines in Pakistan and Afghanistan into gaping holes. Historically, IS inspired attacks have targeted sectarian vulnerabilities in both the countries.

The Shia-Sunni fault line is a vulnerable one. The exploitation of the same in Pakistan has already started. The recent attacks out of nowhere on Shia and Sunni targets are an offshoot of the same. While condemning the killing of prominent scholar Maulana Adil Khan in Karachi, Prime Minister Imran Khan has said that for the last three months, India has been attempting to target religious scholars from both Sunni and Shia sects to create sectarian conflicts across the country. Further to this, the assassination is seen by leadership of different religious schools of thought as a planned bid on part of the enemies of Islam and Pakistan to dislodge peace in the region post peace agreements in Afghanistan. The announcement by a motley of extremists to conduct attacks against law enforcement agencies and Chinese investments in Pakistan is the extension of the same.

Another soft target to derail the Afghan peace process are women. With Afghan peace talks underway, those seeking to undermine the process are targeting Afghan women in hopes of derailing it. In the current talks, five women serve on the government’s 21-member team, while there’s none on the Taliban’s team. Afghan women had hoped for more opportunity to influence the peace dialogue, but the presence of any women at the table marks progress: in 67 rounds of talks between 2005 and 2020 (including formal and informal negotiations, exploratory meetings, and internationally backed consultations), women participated on only 15 occasions (22%).

Many women are now being targeted, which include brave women like Fawzia Koofi, a former member of Parliament, who is a part of the current delegation from Afghan side, has visible injuries from a recent assassination attempt by unknown gunmen. Ms. Saba Sahar is another example. She holds a high-level role with the police force and Ministry of Interior. She was brutally attacked, and her husband believes that she was targeted for her work, promoting women’s rights. The targeting of prominent female figures is feeding into wider concerns about what the outcome of the peace process will mean for Afghan women, and whether there could be a rollback of the progress made in the last two decades.

A segment of women leaders of Afghanistan used to strongly oppose any negotiation with the Taliban, but with the changing ground reality, this is no longer the case. However, fear and skepticism still prevail. The Afghan government, unfortunately, is also perceived as an unreliable partner in supporting the cause of women rights. The previous and present governments in Kabul have rebuffed demands for full women participation in the process. Their participation should be methodical, sustained and substantive. Women’s rights need to be protected at all costs and the gains the Afghan society has made because of female empowerment should only be consolidated and not squandered away. The deal should include the voices of women who are now building communities and promoting hope at all levels. Women are the key to peace; if their rights are ignored in the peace talks, then perhaps the efforts to build a peaceful society may not be sustainable.
Walking the talk is the biggest challenge, transition of long-drawn conflicts to sustainable peace on the ground is a complicated process. Ending wars is comparatively easy; achieving peace on the ground is another story. The pitfalls are many, the way forward is to thwart them. The current approach is not all encompassing. It purposefully neglects the critical issue of public participation. The construct is both elitist and imposed. Half of all peace agreements fail, and when they fail, the conflicts become more intractable. One major lesson from history of successful transitions is: go slow to go fast. Comprehensive peace processes are multi-level and multi-layered, involving pragmatic efforts to build the widest consensus possible, around a shared future. Pakistan and Afghanistan have a shared future, this has been proven time and again and beyond any doubt. All stakeholders have invested in competitive politics of conflict for too long; let them invest in peace now.

The writer is an Associate Professor of Social Sciences and Liberal Arts, at the Institute of Business Administration (IBA) Karachi.
E-mail: hnbaqai@gmail.com